In part 1 and part 2, we discussed the expressions of regular riding and the work in hand. The third part, the airs above the ground, is probably the most recognizable expression to the public. Most people identify Lipizzans with the airs above the ground, especially at the Spanish Riding School. It is thrilling to watch the horses execute the various leaps through the air, and these leaps are an amazing feat of strength and agility. None of these appear in competition (at least, not on purpose), but they are icons of the traditional classical riding art. The old riding schools perform these both in-hand and under saddle, though the horse usually learns them in-hand before they learn them under saddle.

What Are the Airs

The Airs On the Ground

Levade: The levade is one of the more iconic airs. In this, the horse “sits” into a low rear, 45 degrees or less to the ground. Sometimes, the horse’s hocks will nearly touch the ground. It is very demanding on the horse’s muscles and therefore only lasts a few seconds.

Pesasde: The pesade is a closely related cousin to the levade and is often mistaken for it. However, the pesade is a rear that is more than 45 degrees to the ground. This is much easier for the horse to hold and can be held much longer.

Terre a Terre: The terre a terre is something like cantering in place, except the hind legs land together and the front legs land together, more like a constantly moving levade. This is more commonly used in mounted fencing, as it allows the rider to “hover” in place before cantering forward or changing direction. In fencing, the rider can use this instead of a flying change if they’re not sure which lead they will need. It is also beautiful and thrilling to watch, though few riding schools demonstrate it.

Mezair: While some use a different definition for the mezair, the traditional mezair was an absolutely straight form of the terre a terre. It is also rarely seen at most of the riding schools in Europe.

There are other airs on the ground, such as carriere and falcade, but these are closely related to terre a terre and sometimes difficult to differentiate between them.

The Airs Above the Ground

Capriole: The capriole is perhaps the most iconic air above the ground. In this the horse leaps straight up and kicks out with both hind legs while the front legs stay tucked. The horse truly looks like it is flying in this air, and it makes one appreciate “one horsepower.” While it looks impressive and potentially deadly to enemy soldiers, it was rarely used on the battlefield. In the past, the jumps were relatively low to the ground. However, the jumps are much higher nowadays.

Croupade: The croupade is a close cousin to the capriole, but the horse tucks the hind legs under rather than kicking out.

Ballotade: The ballotade is another relative of the capriole, but the hind legs do not kick out.

“Spanish Jump:” This is another cousin to the capriole. However, in this extremely rare version, both the front legs and the hind legs kick out.

Courbette: The courbette has taken many forms over the years. In the past, the horse reared, jumped, and landed again. The Spanish Riding School innovated it in the last two centuries, however, and its form there is iconic. The horse rears up onto its hind feet quite high and jumps multiple small jumps with the front feet staying off the ground. This is incredibly difficult but absolutely magnificent.

There are other airs above the ground in different historical literature, and sometimes the literature has different definitions for the same name. However, these are the best understood and easiest to see.

What Makes a Good Airs Horse?

Airs horses are a special type of horse. They are energetic, sensitive, and incredibly strong. They are not always the ones with the best conformation, and sometimes they are extremely “hot” in temperament. Some airs horses become such because they are too hot or nervous for other work. However, others, like our Conversano Ivey, are quiet and gentle but really love their “bouncing.” Our Conversano Ivey particularly enjoys the terre a terre and has offered low jumps by accident.

While the airs are fascinating and beautiful, riders must be very careful before teaching their horse the airs. If you have a horse that might be talented for them, please consult with a knowledgeable airs trainer before teaching them to your horse. Horses find them a lot of fun and sometimes will use them as an evasion. They also require careful preparation of all the ridden work, including a powerful piaffe. Without this preparation, the horse might strain or hurt itself.

The airs are magnificent feats of equine strength and athleticism. Even average people with no horse experience can appreciate the power and beauty of the airs. While they are not extremely common to see, they are magnificent icons of a bygone era of classical riding. 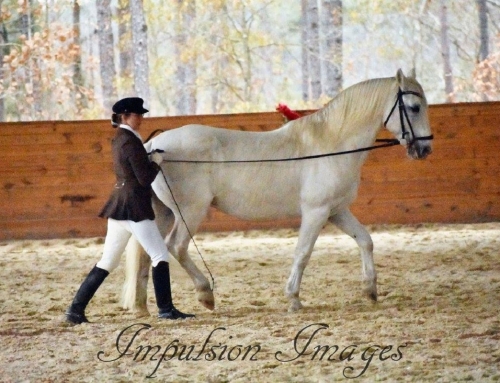